Sometimes I learn profound lessons from unexpected sources, like when my preschoolers decided that they absolutely must watch Frozen about twenty-seven times in a row, and suddenly, after plopping onto the couch in resignation to watch it yet again, I had a Disney-princess-induced spiritual epiphany. 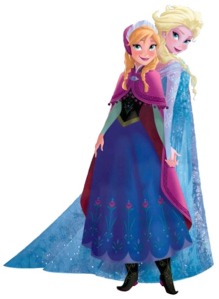 As a mom of boys, I never expected to have the princess craze hit our house, and seeing as how I’m a feminist scholar who isn’t precisely thrilled with the gender ideology behind most of those animated gals and their beaux, I certainly never thought that I would learn (or perhaps remember something I had forgotten) from watching a pair of princesses.

If you are one of the lucky adults who has not been subjected to Frozen enough times to have it memorized, the key detail here is that Princess Elsa is terrified of her icy magical powers, and in the end, what conquers that fear and saves the day is not a charming prince, but rather the love of her sister, Anna.

Here is what I learned from Frozen: Fear, like hate, is an opposite of love. Anxiety is the opposite of peace. And as a high-anxiety type, I often need to “Let it go!” First John 4.18 tells us, “There is no fear in love, but perfect love casts out fear . . . and whoever fears has not reached perfection in love.”

God is love, and during Advent we take time to reflect on how Jesus came to reveal that love to us. We celebrate Emmanuel. God with us. Love with us.

As we strive to be Jesus-followers, we should participate in that perfect love that conquers fear, even when a thousand voices on the TV and the radio and the internet tell us that there is some BIG NEW THING to be terrified about today.

Fear makes us withdraw and disengage in order to protect ourselves. It makes us fort up and then lash out when our defenses feel threatened. Fear turns our focus inward, but God calls us outward, to the love of family, friends, neighbors, strangers, and even enemies. God calls us out to compassion, involvement, and vulnerability. To love, not its opposites.

Fear and love do not easily coexist; we must let go of one to make room for its opposite.

Some days, I am rather terrible about remembering this. So during this Advent season, I have challenged myself to listen to the angel proclaiming in Luke 2.10, “Fear not: for, behold, I bring you good tidings of great joy!” This is the marvelous news of God’s love abiding with us, of God becoming a participant in the human condition, of God choosing to be vulnerable, involved, and known to us.

In these last few days of Advent, I challenge you to read the Christmas story and hear the angel’s words again. If you are holding onto fear, listen to the angel, and let it go.

Let it go and see what it leaves room for in your soul.

I love Advent and Christmas. I also love the nativity story, but apparently I’m not that great at explaining it to small children. On the first Christmas that my oldest (subsequently referred to by his nickname, Goo) was old enough to have a bit of a conversation, I pointed out every nativity scene on our street and talked about how Christmas was a celebration of Jesus’s birthday. I encouraged Goo to wish a “Happy Birthday!” to each baby Jesus that we passed.

I figured that this was the easiest way to begin to explain the meaning of Christmas to a not-yet two year old, but before I knew it, Goo was wishing an enthusiastic happy birthday not only to the wooden baby Jesus cut-out in the life-size nativity scene, but also to the huge blow-up Santa in one yard and to the jolly snowman in the next. “Happy Birthday, Santa!”

I do cut myself a break on this one considering that he was only 20 months old, and I was in a fog of sleep deprivation (and possibly pain meds) from having delivered his little brother Roo via c-section the week after Thanksgiving.

Fast forward three years to our current Christmas season. The exact same nativity scenes, Santa Clauses, and snowmen have popped up on our street. Every afternoon when I pick up the kids, we make the obligatory trip around our block to see and comment on all the important sights: the neighborhood fire station, the backhoe loader parked by Publix, the bridge over the creek, and now, those familiar wooden cut-outs of baby Jesus in his manger. In this repetitive loop that is life with small children, I invariably say “Look! There’s baby Jesus! He was born in a stable. And there’s his mommy . . . ” and so on.

I was fairly pleased with the progress of these little conversations until I had to take Goo to the doctor early one morning. As we were leaving the office, he noticed this Christmas display outside: 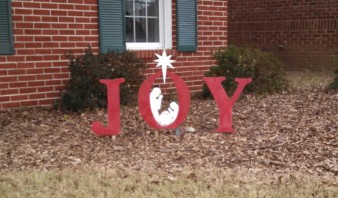 He excitedly pointed to it and exclaimed, “Look! There’s baby Jesus! He was born in an ‘O’!”

Of course, from my reaction, Goo realized that he had made a funny, and then for the rest of the day he kept saying with a big grin (and let me tell you, this kid has a grin), “I saw baby Jesus born in an ‘O’!”

But at least Goo has a sense of humor, and at 4 1/2 and 3 years old, Goo and Roo (collectively known as the ‘Oos) are at least curious and excited about the Christmas story even if they can’t quite get the details sorted.

To my credit, I recently searched the bookstore high and low for a good nativity storybook for young children because the books we had didn’t explain the story very clearly. I picked up one book after the other and put them all back only to leave empty-handed. Why?

Some told sweet and cutesy stories from the point of view of the animals in the stable, which is fine, but it isn’t going to help clarify the basics of Christmas for my kids.

Some padded the nativity story with theology that in my opinion doesn’t really belong there, especially in a book for small children. They don’t understand hints at the concepts of sin or atonement, much less what those ideas have to do with the Christmas story. Obviously, they have enough trouble digesting the story itself and giving it meaning!

Also, I have to admit that I put back a couple simply because the holy family was way too white (I mean, have you seen the Little Golden Book’s ginger Joseph?!). While I don’t have a problem with Jesus being depicted as white (or any other race), I do have a problem that depiction being so prevalent that people (like Megyn Kelly of Fox News) believe it to be a historical fact and forget that Jesus is quite foreign to us in time and space even as Christ is universal. My kids regularly see depictions of Jesus as white, and that’s fine, but on my book-hunt I was determined to inject just a tiny bit of diversity into that picture.

Picking out Christmas books was so much easier before I became a theology nerd! After much looking, though, I found two that the ‘Oos and I like. So if you are looking for simple and engaging nativity stories for your little ones, check these two out:

This is the Stable, by Cynthia Cotten, illustrated by Delana Bettoli. This colorful and beautifully illustrated book tells the events of the nativity with a gentle, repetitive rhyme reminiscent of “The House the Jack Built” (but much less annoying to read!). Mary and Joseph, who look like they could reasonably be from the holy land, appear full of love and joy as they gaze at their new arrival in precisely that way that new parents do. On another page, pale angel women in bright floral dresses fill the sky as they announce the news to startled shepherds who then gather with the wise men at the stable, which despite the season, is a bit overgrown with morning glories.

The Nativity, illustrated by Julie Vivas with text from the King James version of the Bible. I love this book because it takes the oh-so-familiar language and cadence of the biblical Christmas story and matches it with wonderfully whimsical illustrations that feature a cast of surprising and ethnically diverse characters. The pictures are also loads of fun to talk about as you read and explain the KJV text. Gabriel arrives with torn-paper wings and unlaced work boots to talk to Mary over a cup of coffee. Mary’s belly (and her bottom, as Goo pointed out) swells to uncomfortable size and poor Joseph has a hard time boosting her onto the donkey. Baby Jesus peeps onto a page, fresh from the womb, and then Mary slumps exhausted as Joseph tenderly cradles the newborn. The illustrations tell the familiar story in a delightfully unexpected way, with a glimpse at the miraculous yet very human birth of Jesus.

It is a wonderful first glimpse of incarnation, and that’s what Christmas is all about.

Emmanuel. God with us.

Do you have a favorite nativity storybook for young children? If so, please share in the comments!

Welcome! Wander on in!

Want to wander along?

Email is the best way to keep up with new posts, which appear on the blog about once a week (i.e. not often enough to junk up your inbox). You can also follow via Twitter or Facebook. Click the links below to connect with me!

Blog © Leslie Maxwell Kaiura, 2014-2015. Unauthorized use and/or duplication of this material without written permission from this blog’s author is prohibited. Excerpts may be used, provided that credit is given to the author with links or direction to the original content.

Popular Posts on "Prone to wander . . . lured by grace"